For this month — the month of HEARTS (or hurts!  Chos!) —  I’ve prepared a very special feature.  Why?  Because I’m not just going to feature one traveler, but TWO travelers!  That’s right.  I’ll be featuring two of my college friends, Danica and Pia, who’ve been kind enough to share with us their adventures in North America respectively! 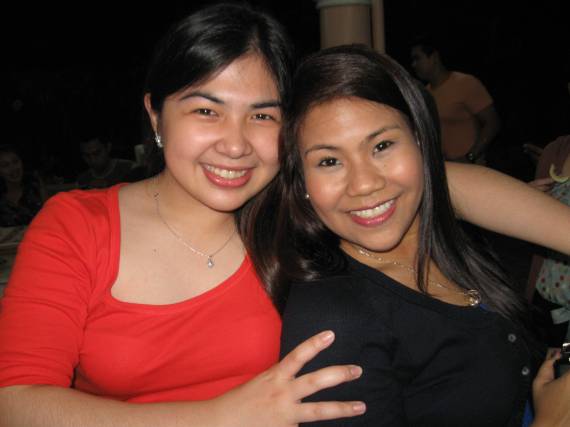 …with Danica. By the way, HAPPY BELATED BIRTHDAY!!! 😀 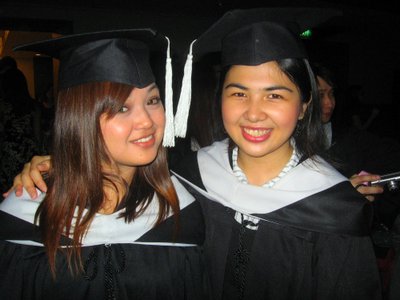 But before that, let’s get to know D and P first, shall we?  So, let’s get the ball rolling…

When do you think the “travel bug” has bitten you?

DANICA: My love for traveling started when I was really young.  I remember my mom would always bring me to Hong Kong with her when she was looking for a possible market for our recruitment business.  I remember then that I’d memorize MTR lanes and stops at a young age.  Also, my dad was very fond of mapping when we are traveling and so, that somehow made me love traveling and getting to THE destination. 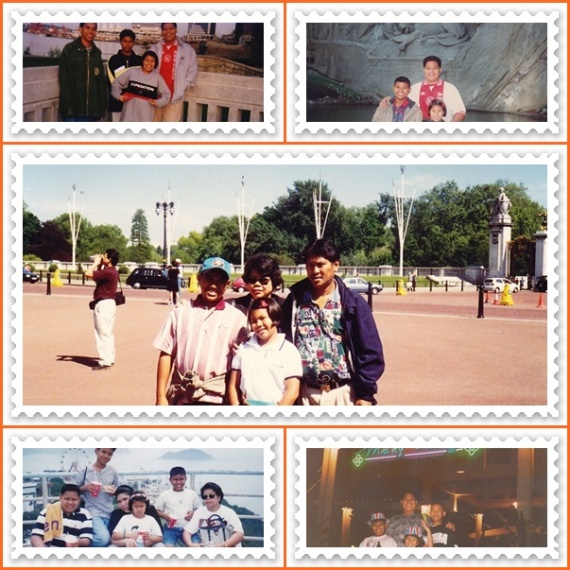 PIA: For many years, I’ve been surrounded with people who love to travel.  And since I was a little kid, with relatives and friends going in and out of town, I’ve always dreamed of traveling, riding airplanes, and exploring different types of food and cultures.  I actually labeled 2011 as my travel year, went to different awesome places in the country as much as I could, with my U.S. and Canada trips being the highlights of my travel year. 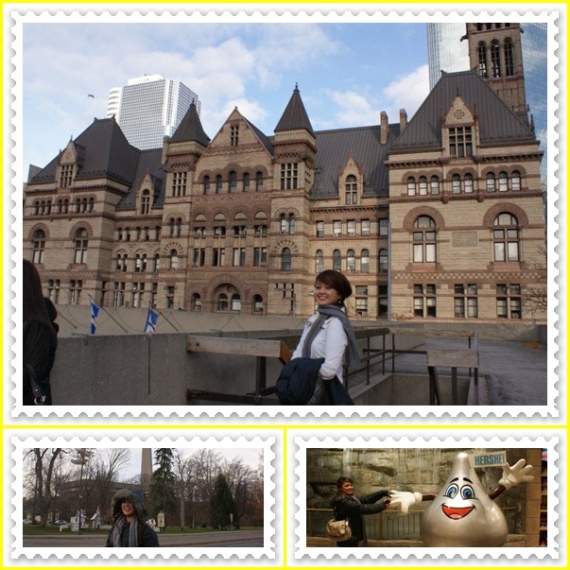 How many countries have you traveled to so far?

D: I’m not so sure.  The first few countries I visited when I was young were Hong Kong, Singapore, and Malaysia.  The family tours that followed were in Canada, a few countries in Europe, and then the U.S.

P: So far, I’ve been to only three countries [excluding the Philippines]: Hong Kong, the U.S., and Canada. I still have a long list of interesting countries to visit.  This month, I’ll be in Singapore with my friends — it’ll be my first time to go there and I’m very excited!

Do you travel with your family?  If so, how can you describe traveling with them?

D: Yes, it always feels good to travel with my family.  I always feel that we get closer after every trip that we have.  Also, we get to share more stories with our relatives when we get back.  For example, when we went to New York last May 2011, I got to hangout with my bestfriend from gradeschool and sharing stories with my brother (who was traveling with me then) when we went out for drinks made me feel good about the whole trip — it gave a sense of a sharing experience.  During that trip, I got a lot closer to my uncle as well.  He had the week off and booked a trip to New York with us.  He showed us around the city since it was our first time.

P: I travel mostly by myself or with my friends.  In my recent U.S. and Canada trips, I traveled alone.  I was on a total of eight flights.  Yes, it was tiring to carry around huge bags (not to mention not having someone to talk to while on the plane for hours!), but the excitement of getting out of the plane and being in a totally different place made everything so worth it.

What’s “traveling” for you?  How does it affect you?

D: Traveling has always been an exciting experience for me. I’m a very curious individual and I always love learning something new about something or someone.  Traveling has helped me understand better the different cultures and traditions we have and so, it has become something I always look forward to.

Danica‘s TRAVEL TIP: “Always, always travel light.  You can always buy things that you need, clothes in particular, in different destinations.  Plus, they can serve as souvenirs.”

P: For me, traveling’s something everyone should do while they’re still young.  Aside from escaping from your stressful day-to-day life, I believe it’s also a way of discovering how life is lived in other places.  Travel and be inspired!  Don’t pass up the chance to travel while you’re still young because when you get older, there may be a slimmer chance for you to do it.

Pia‘s TRAVEL TIP: “For all those jetsetter wannabes like me, when planning your next vacation, make sure you do some research first before going — for safety and security purposes — then leave everything else for adventure!”

The U.S. of America According to Danica

Danica has been to the United States before, but her latest U.S. trip last May 2011 was actually her first time to visit both Hawaii and New York.  BUT it was Hawaii that has left a bigger impact on her.  She said, “Hawaii felt like an extension of my province — Ilocos Norte — since most of our relatives are there and I met a lot of people who speak Ilokano.  I got to encounter a lot of Filipinos in Hawaii, especially at Ala Moana’s food court — who were mostly Ilokano, too. 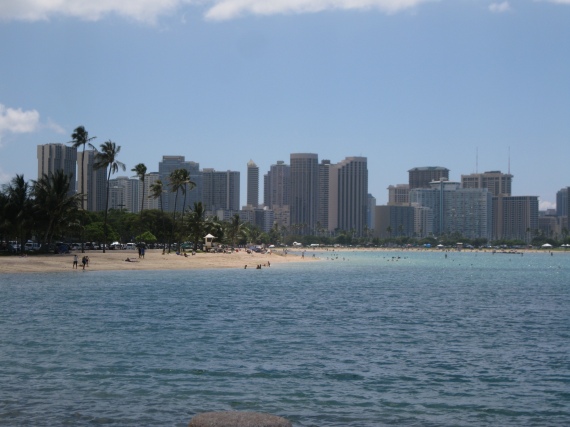 “So far, I’ve been to California (Los Angeles and San Francisco), Texas, New York, and Hawaii.  Visiting the U.S. is always about visiting some of our relatives.  It’s just that lately, it has also been about visiting a few friends since we’re a bit ‘grown-ups’ now.” 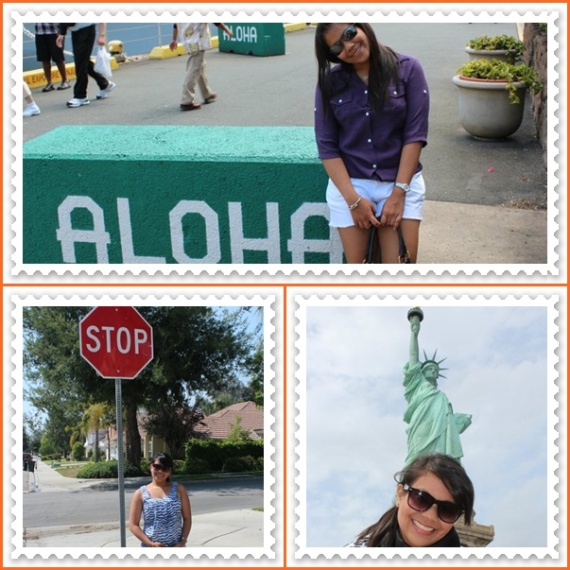 When asked about the place in the U.S. that has left a big impact on her, Danica shared, “I will never forget my Hawaii trip last May 2011.  Saying that I had a great time’s an understatement.  My stay in the island lasted for a week, and choosing to stay at Kuhio Avenue was so worth it.  I crossed the street to get to the International Market Place, Waikiki Beach, and a stretch of awesome-ness!  Everything was just close to everything, and having to ride the bus wasn’t a pain in the ass compared to riding a bus in Manila.  The week-long trip was unforgettable, but I’ll share those that made it at the top of my list. 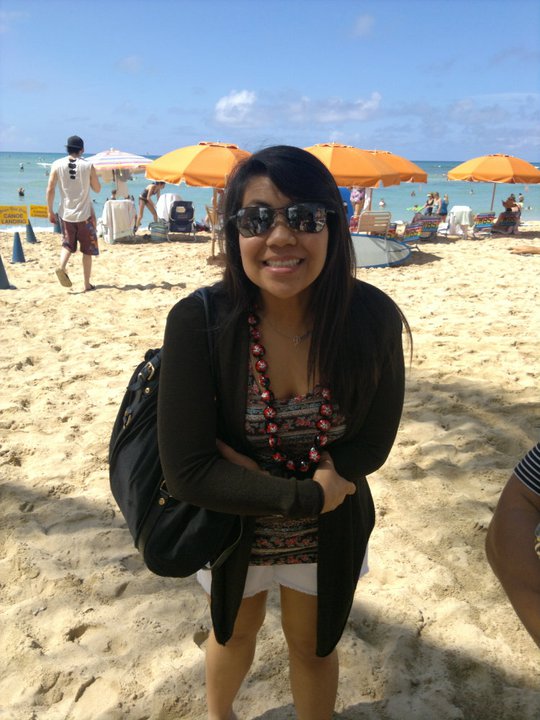 “I guess one unforgettable experience I had would be the one over at Hanauma Bay.  It was a great day, the sun was up, and I was so ready to go snorkeling and see the reefs and fishes up close (imagine seeing Nemo and Dory), but it was such a struggle for me because it was low tide on that day!  I tried to swim and simply checked out the beautiful reefs and fishes.  At first, I was really freaking out because they were really close to my face and they’re slimy as f***!  Hahaha!  But eventually I got used to the ‘closeness.’  Right after my adventure, I saw that my legs were full of scratches and bruises.  Reefs are a bad idea when it’s low tide, but the view was just too breathtaking to miss! 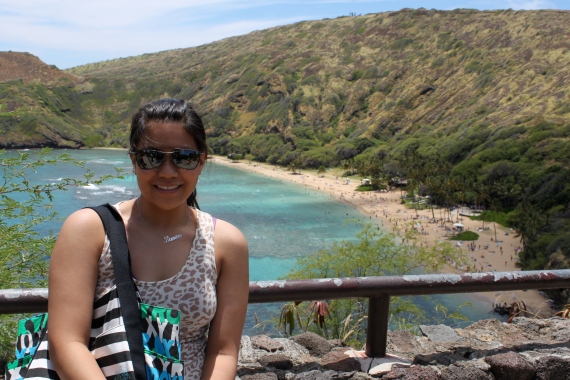 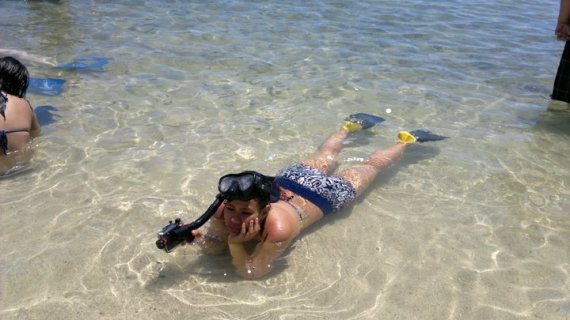 “I also enjoyed the Diamond Head trail, a two-mile hike involving steep, dusty, and dark-in-others trail that allowed me to see the beautiful view of O’ahu. 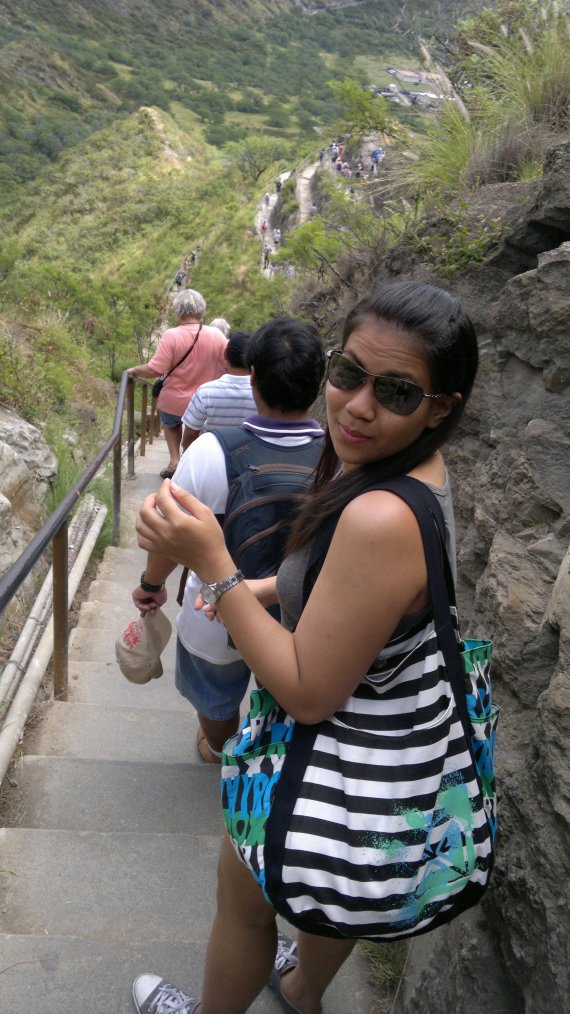 “And when it comes to food, I’m not hard to please.  I’ve always enjoyed In-N-Out, Cheesecake Factory, the Yardhouse, Panda Express, and Chipotle.”

Danica‘s TRAVEL TIP for those planning to visit the United States:

“When traveling in the U.S., well, sunblock is a must!  Nakakalinlang ang cold weather nila.”

Canada According to Pia

Pia‘s latest Canada trip was short and sweet.  She was also in the U.S. for a three-week vacation, and then she decided to spend a week with his brother and his family who are now living in Toronto.  She remembered, “I was able to make the most of it.  We went to different interesting places.” 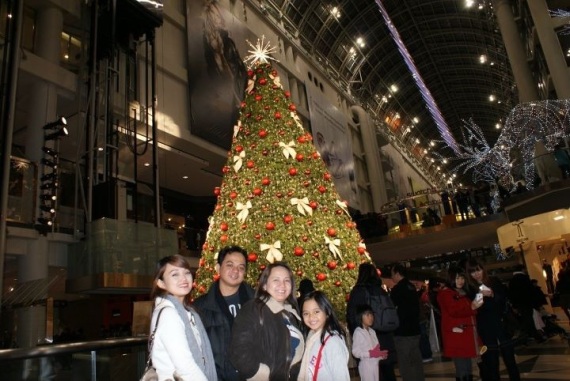 A photo of Pia with her brother Marvin, sister-in-law Emily, and niece Mara taken inside the Eaton Center, downtown Toronto. 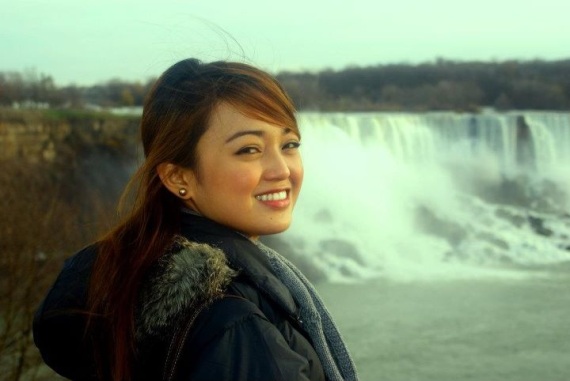 The Niagara Falls: “One of the most beautiful and breathtaking views I’ve ever laid my eyes on. Standing right in front of it was like standing in front of a 4D painting, complete with cool mist spraying all over my face.” 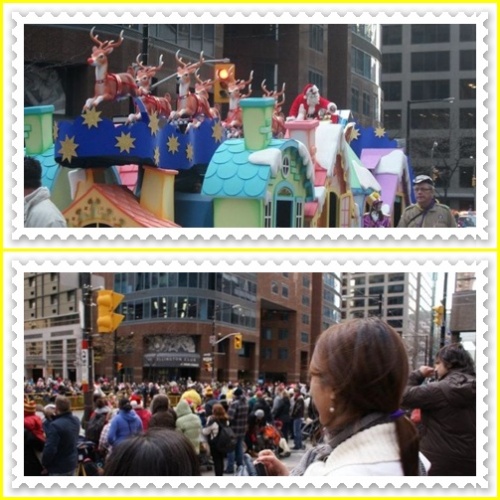 She was also lucky to have witnessed the annual Santa Claus Parade, a tradition which started in 1905. 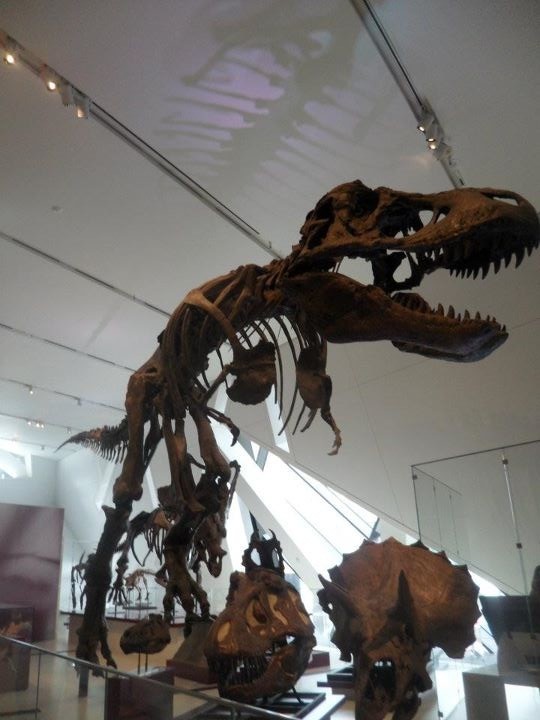 “I’ve always thought dinosaur fossils only exist in movies like ‘Jurassic Park,’ but I actually saw real ones in ROM or Royal Ontario Museum – a museum of world culture and natural history.” 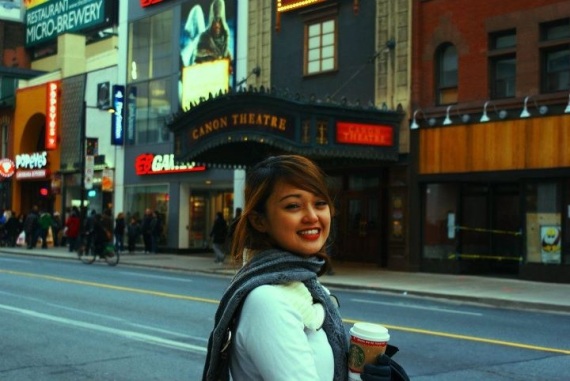 Canon Theatre – a historic film and play theatre built in the 1920’s. 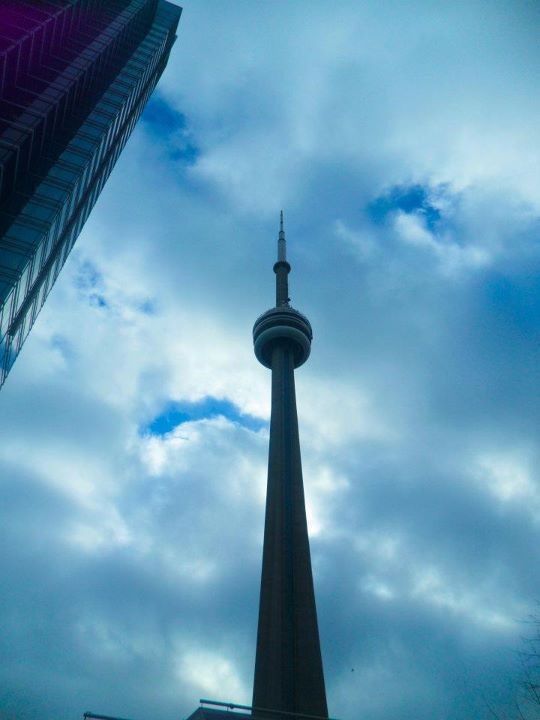 “One of the major tourist destinations in Canada, the CN Tower, is one of the world’s tallest structures ever built.” 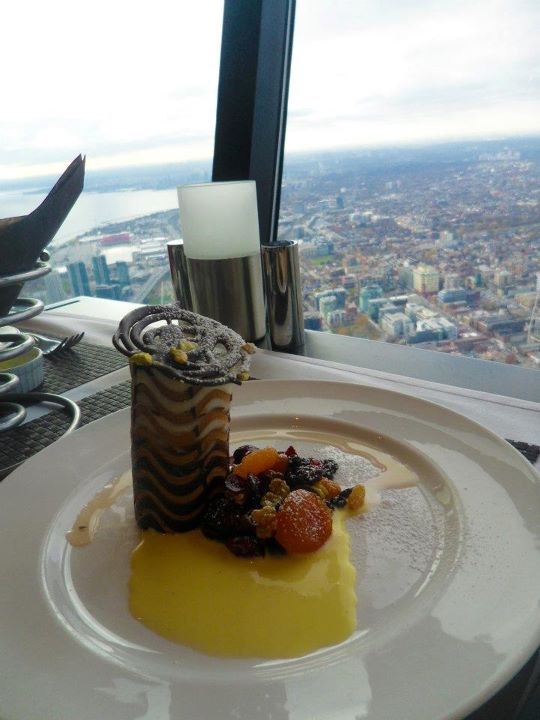 “My ‘chocolate tower.’ This photo was taken in a restaurant called 360, inside the CN tower. It’s a fine-dining restaurant that literally revolves to offer a great 360 view of Toronto – 1,515 feet above the ground! To those planning to visit Toronto, make sure you don’t miss this place.” 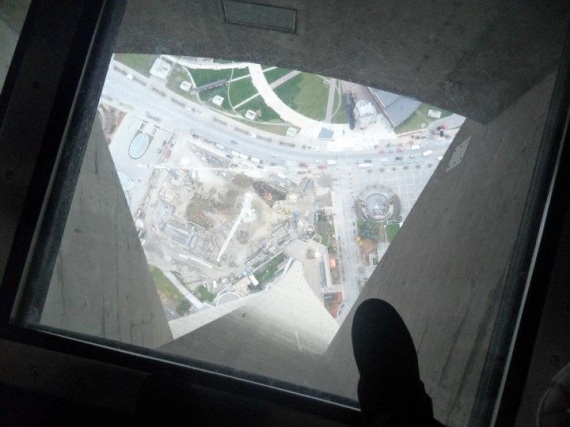 “Tourists, like me, dared to stand on the glass floors.” 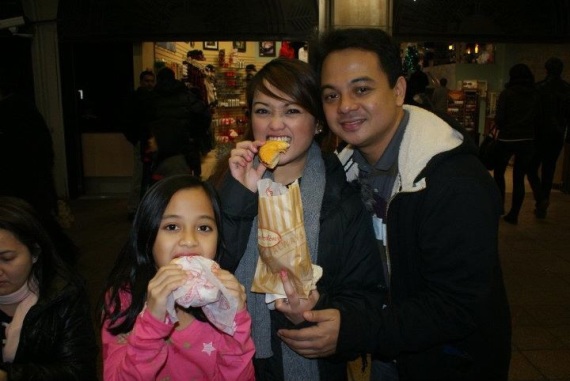 “Tim Horton’s is Canada’s version of Starbucks. There’s one in every corner. I was able to try their biscuits (so good!) and of course, their ever-famous French Vanilla.”

Pia‘s TRAVEL TIP for those planning to visit Canada:

“If you’re planning to visit Canada, make sure you’re prepared for the cold weather.  I went there during the fall and I wore layers of clothes.” 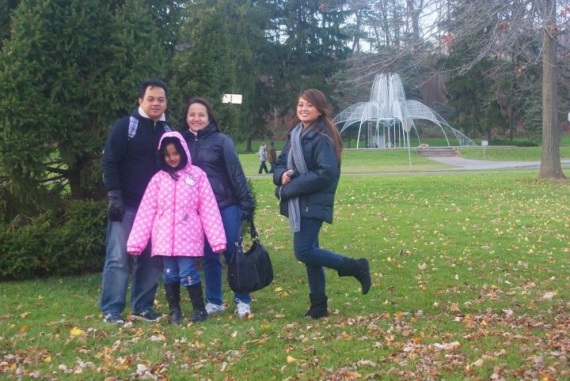 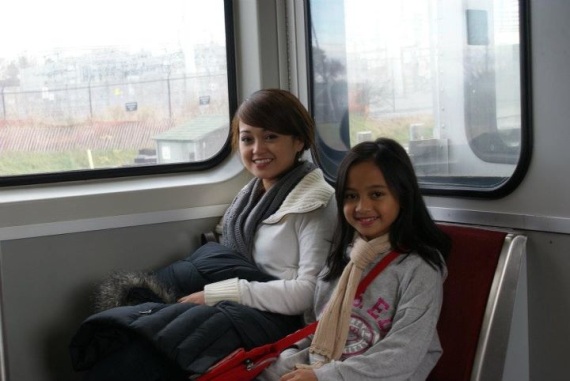 “Here’s a photo of me and my niece inside the subway. It’s much easier to go around by taking the bus and the train than driving your own car.”

When all has been TRAVELED TO and done, the “travel bug” will still keep on “bugging” you!  That’s why Danica and Pia have other dream destinations…

D: My next dream destinations are Australia, New Zealand, and Japan.  I’d like to check out Australia and New Zealand for job opportunities, really.  But I’m very much curious about the pure adrenaline drive people are crazy about (bungee jumping, paragliding, and sky diving).  With Japan, basically, I want to see the cherry blossoms and an ice bar.

P: I don’t have a particular dream destination as of yet.  I’m just inspired by my friends and their experiences in different places in the Philippines and in other countries.

And that wraps up North America according to my two friends Danica and Pia! 😀  How about you?  What’s your DREAM DESTINATION?

Well, I think you can agree with Danica first for next month, I’ll be featuring my next continent: OCEANIA (or AUSTRALIA).  See you again on the 12th of March!!!

Also, check out January’s featured traveler –
Traveler of The Month: Minnie And Her Latin American Adventure.

Mikhaela Georgette or (Wander) Mika defines "wandering" as living a "pointless" life without God in it. And that is where FAITH comes in. Thankfully, she has the best "travel" buddy: JESUS. She prays that you find Him in your own journey, too, and live a life full of looove (1 Corinthians 13:2)!!! :)

TO GOD BE THE GLORY ALWAYS AND FOREVER!

Everything posted here is based on my own views and does not necessarily reflect the views of my employer or any organization/s I may be affiliated with. -Mika