Intrigued by the title?  Well, my latest domestic trip pretty much revolved around those Words Of Wisdom… 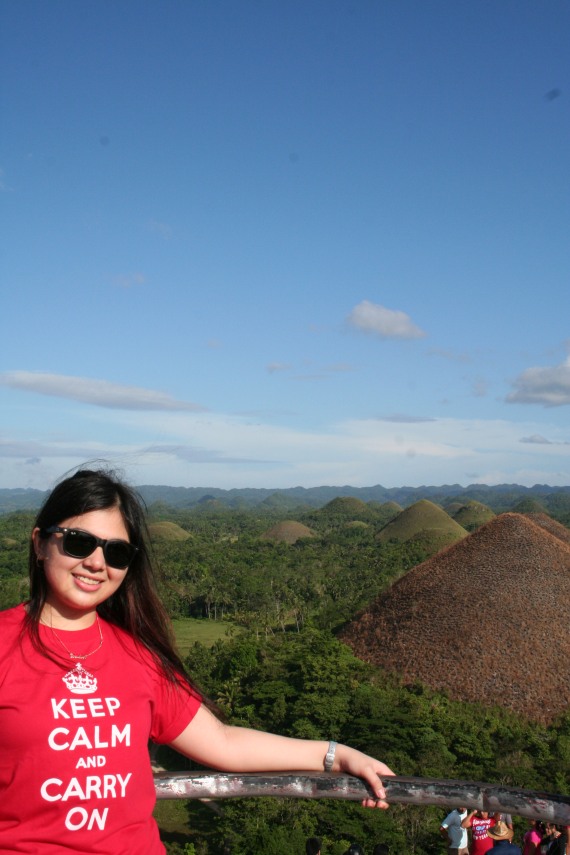 …but before I tell you all about THAT trip, have you watched the parody movie A Tale of Two Cities and Three Friends?  It’s actually a local indie film released early this year, and its synopsis is quite relevant to this post.

So if you still haven’t watched it, the synopsis is about three friends who went to two cities (DUH — what a stupid introductory sentence!  Haha!).

Anyway, they arrived at the airport ON TIME, underwent the usual airport protocol, found seats near their boarding gate…  sat still there until it was already near their boarding time.  When they realized that it was already past their boarding time and they still haven’t heard anything from the airport announcements, they assumed that their flight must’ve been delayed.  And so they waited…  and waited…  until it was too much.  It was really odd to have a delayed flight just like that, so one of them decided to finally ask an airport staff.  That’s when they found out that their plane had already taken off and they were left behind at the airport! x_x

Of course it was a total bummer, but one missed flight wouldn’t stop them from pushing through with their trip.  They immediately went to the ticketing office inside the airport, booked the next flight (even though that meant spending half of their pocket money!), and attempted to get their luggage BUT they were told that those could just be redirected to their next flight.  And they believed it.

When they finally boarded the next flight, it turned out to be 2 hours delayed! Yes, TWO FREAKIN’ HOURS!  Upon landing on their first destination…  surprise, surprise!  Their luggage was missing!  Turns out that the airline failed to “redirect” their luggage to their destination, and the three friends were forced to spend one whole day without any of their clothes!  Of course they decided to buy toiletries at the nearest store, and considered THAT action as their “first lemonade.”  But c’mon, mamon!  Take a bath, but wear the same clothes for more than 24 hours?  Survivor Philippines ba ito?!

Okay, their luggage arrived just before lunch THE NEXT DAY.  From then on, they “traveled” happily ever after…

Aaand you caught me!  What indie film synopsis was I blabbering about?  Indie film?!  More like hindi film — dahil hindi talaga yun film!  Hahaha!  That “synopsis” you just read was exactly what happened during my trip to TWO CITIES in Bohol and Cebu, with my two friends Carol and Maxine. 😛

That’s right.  Those things happened to us!!!  And when faced with those kinds of scenarios, we turned to “words” for help — our Words Of Wisdom.  Having said that, let me enlighten you more with the aforementioned WOW.

Since we were able to score round-trip tickets to Cebu-Manila and vice versa at very reasonable prices, our original travel plan was take a plane to Cebu, ride a ferryboat to Bohol and stay there for 3D/2N, and then go back to Cebu for an overnight stay.

But when we found out that we were left by our plane (1/8 of the blame goes to the airport; the rest is on us!  Haha!), there was nothing left to do but to KEEP CALM.  And how did we do that?  We decided to just buy the next direct flight to Tagbilaran, Bohol.  Of course that time, there was no promo.  So we had no choice but pay the original price — which kind of defeated the purpose of buying our “promo” fares because when we added the total price of ALL our tickets, it seemed like we paid the original price from the very beginning.  Right.

When we finally had our NEW boarding passes, we tried to get our luggage but the airport staff reassured us that they could just change the sequence number, blah, blah, blah.  Edi syempre we had no choice but leave everything to the travel gods…

And then when we were already on our plane bound for Bohol, our flight was delayed for TWO HOURS!  I repeat, TWO HOURS!!!  Okay, CARRY ON.

Upon arriving at Tagbilaran, my friends and I were even joking that our luggage must’ve went straight to Cebu… 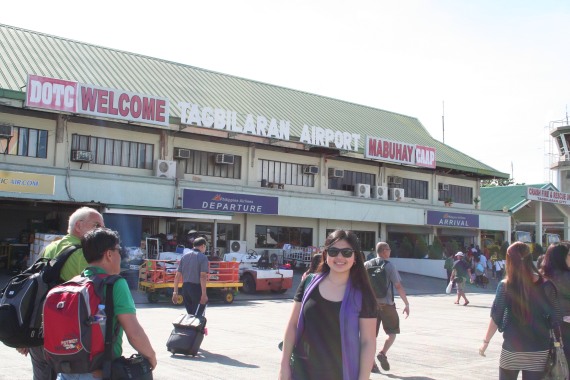 So anyway, since our airline doesn’t have Cebu-Tagbilaran flights, our luggage had to go back to Manila, and then from there, fly to Tagbilaran — THE FOLLOWING DAY!  Since we were so hopeless, we just decided to buy toiletries at the nearest drugstore AND try to survive for the day…

Extra squeeze: When traveling, ALWAYS include your first articles of clothing in your carry-on bags!  No exception!!!  —Credit goes to my friend Carol.  Heehee.

We stayed at Bohol Bee Farm in Panglao, Bohol and I must say, I felt like I went to a detox retreat or something because everything was organic!  Not that I’m complaining, thank you very much! 😀 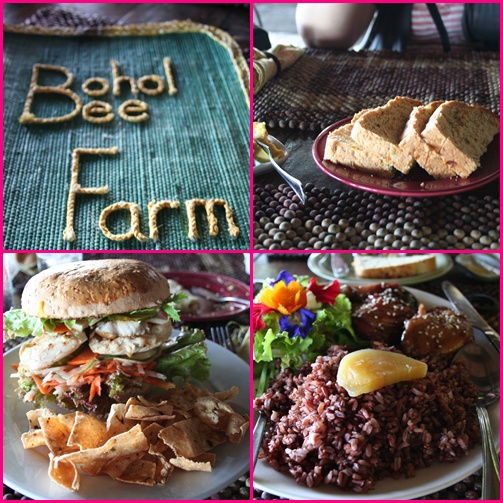 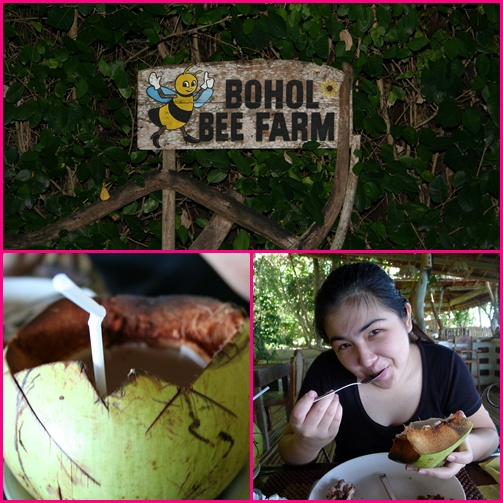 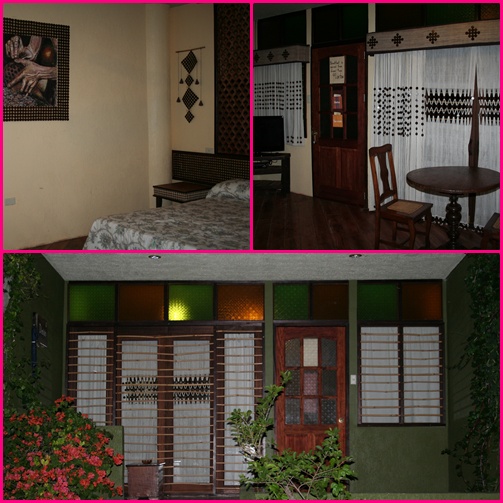 Plus, their ice cream was to die for!  My favorite flavors are malunggay and tsokolate (made from cocoa tablets!)  YUM!!!

Maxine: “HAVE F.E.A.R. (Face Everything And Recover)”

Now, we’re on the “tour” proper.  When our luggage arrived just before lunch the following day, we were finally able to kick-start our “travel plans” — the PLAN B version! 😉

My friend Maxine was able to find a Van for Hire, with Kuya Rommel as our driver: 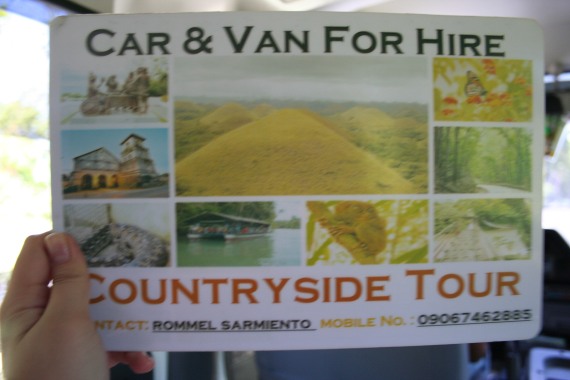 Having said that, we went to the following places: 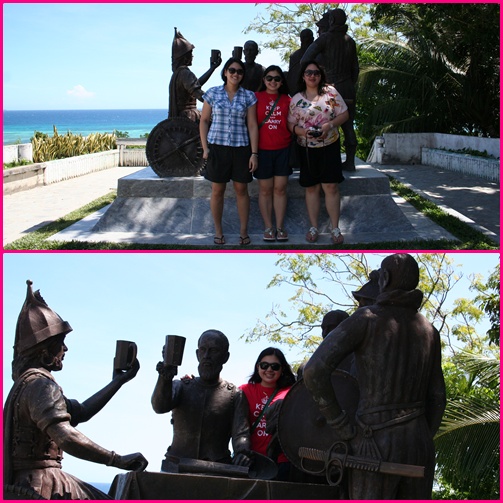 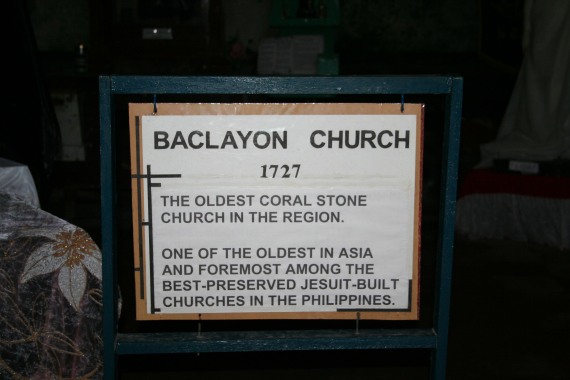 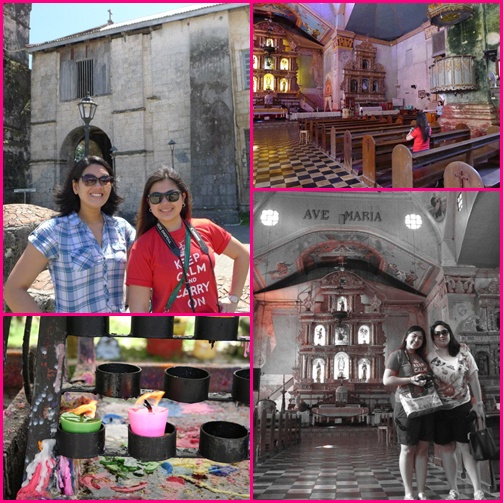 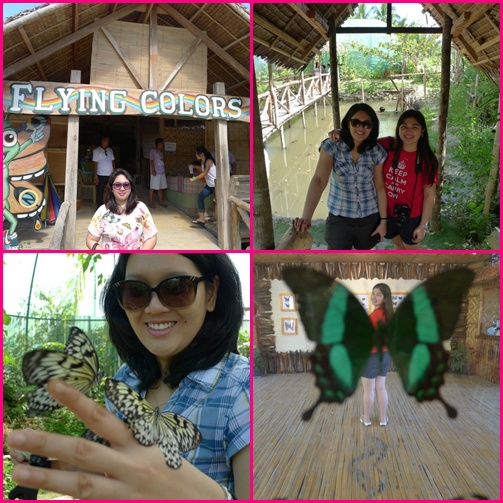 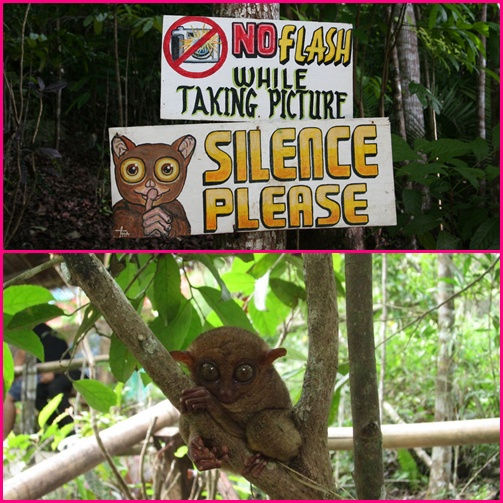 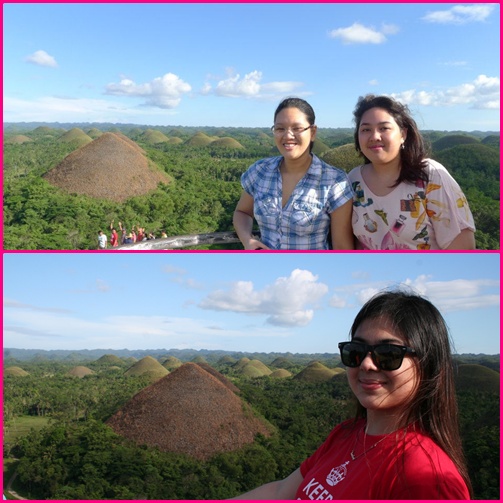 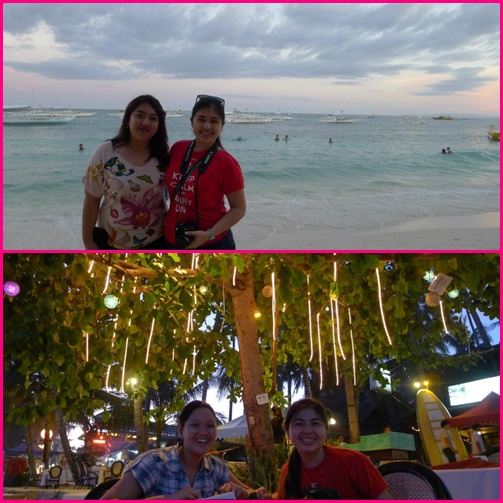 From Bohol, we rode a ferry called SuperCat to get to Cebu.  The entire trip took almost 2 hours, but it was smooth sailing so no biggie! 🙂 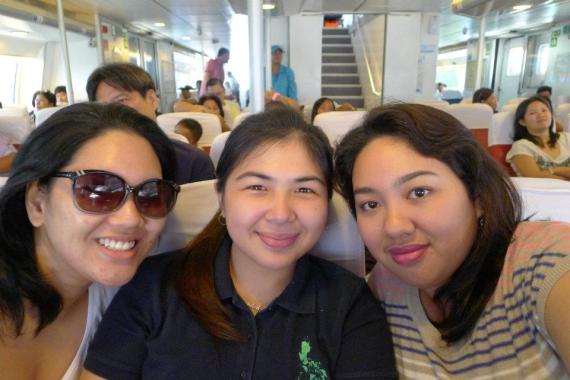 Aside from checking into our hotel, which was Cebu R Hotel, the first thing we did upon arriving in the Queen City of the South was — guess what — go malling at Ayala Center Cebu!!!  But can you blame us?  We’re all self-proclaimed mall rats anyway! =))

We actually watched the movie Battleship there and then in the evening, we went to Marriott Hotel Cebu to have our buffet dinner!  Thanks, Max!  SIMPLY DELISH!!! 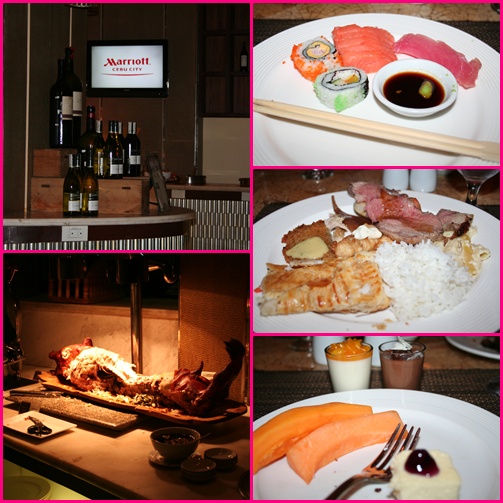 just look at that LECHON! crruuunch.

But wait, there’s mooore!  After dinner, we went back to Ayala Center (isang tumbling lang siya from Marriott, btw!) to meet our friend Biboy.  We all found it so funny to meet in Cebu after NOT seeing each other for yeeaaars!  Talagang sa Cebu pa nagkita-kita eh noh?  Iba talaga ang mga college friends ko!!! 😀 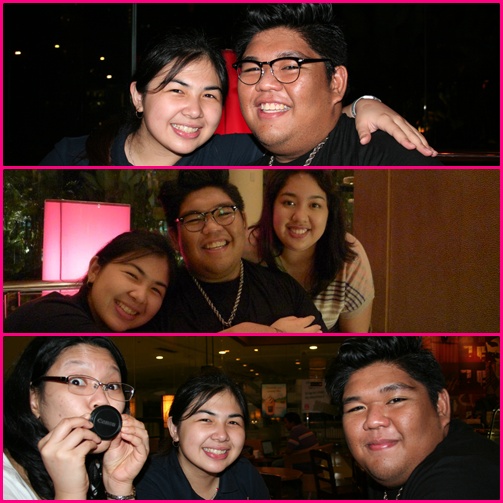 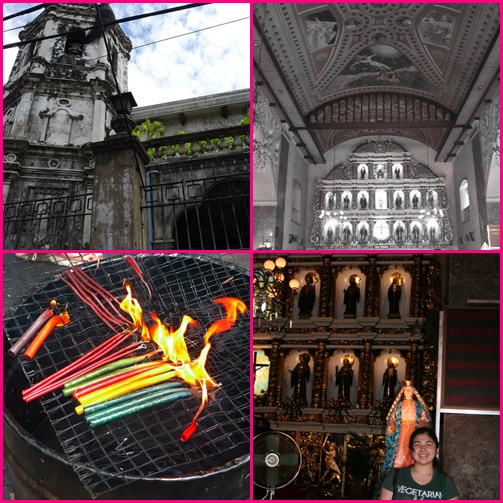 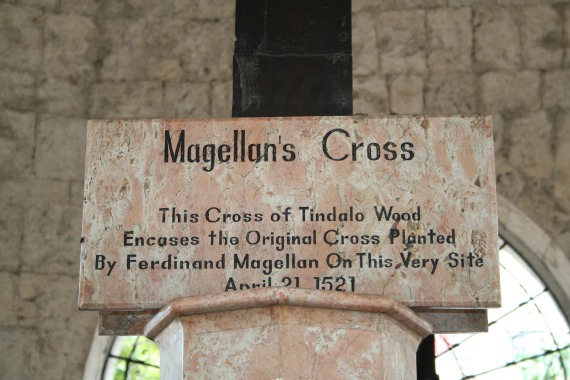 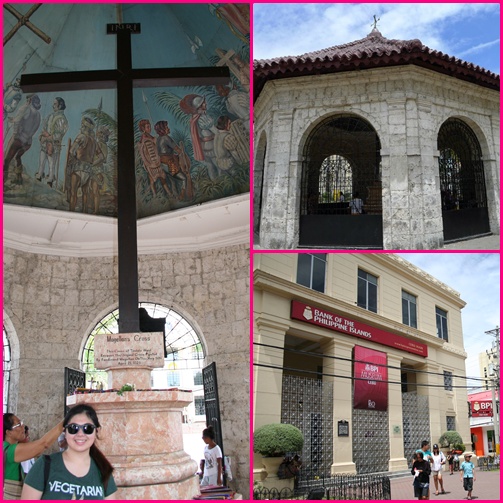 And that’s how we FACED EVERYTHING — by simply enjoying our trip!  I think even the clouds on our flight back to Manila would agree… 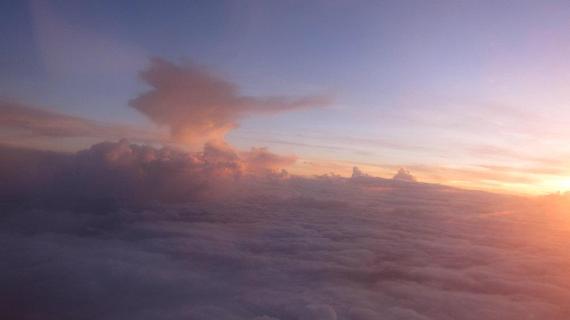 Now the next thing to RECOVER from is figure out a way to be NOT broke!  Haha!  I swear, my friends and I were so surprised to realize that we spent A LOT on this trip…  halos triple nung nagastos ko sa Brunei, which was my latest international trip.  Must have something to do with using the same currency and not thinking about conversion, etc?  Oh well, perang papel.

And that’s it!  Whew, right???  But just think about it…  if all those things from the start of our trip hadn’t happened, then this blog entry would’ve been entitled “Bohol and Cebu” or “My Bohol and Cebu Trip.”

Honestly, that would’ve been plain BORING!  And who needs boredom when you can have fun, right?

Exactly!  MORE FUN IN THE PHILIPPINES it is!!! 😉 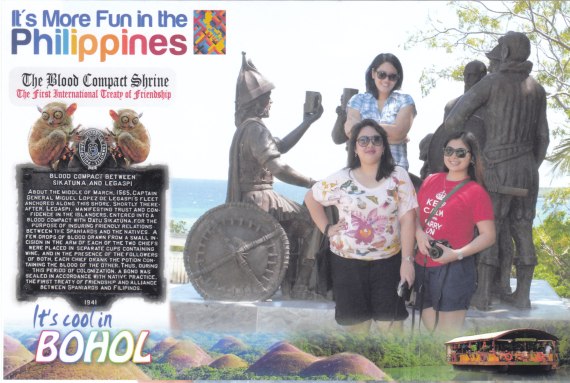 Now, now. I wouldn’t trade “having MORE fun” for anything! Would you?

8 thoughts on “When in Bohol and Cebu… KEEP CALM, CARRY ON, MAKE LEMONADE, and HAVE F.E.A.R!”