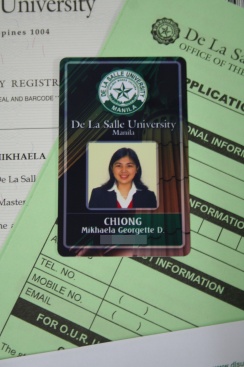 About two weeks ago while I was in Hong Kong, I accidentally dropped my bag with its zipper open.  So go figure.  Apparently, I missed picking up one of its contents — my old (graduate) school I.D. — which I only found out after two days when I was in Manila already!  Kaya lost I.D. kung lost I.D. talaga! x_x

Of course I had to request for a new one (with my old picture and signature), which cost me almost Php700!  I know, I know.  I could’ve avoided spending Php595 for my I.D. and another Php100 for an affidavit of loss if I hadn’t dropped my bag just like that!  Tsk.  That’s why it took me a lot of convincing if it was still worth it to get a new school I.D…

…which brings me back to GRADUATE SCHOOL itself!

For yearssss (and I’m not exaggerating the “s”), I’ve been trying to finish my Master’s Degree.  No, I’m NOT failing.  In fact, if there’s one thing I’m proud of, it’s that I’m already done with my coursework — and I’m happy to say that I passed all my subjects!  Yay!!!

The reason why I’ve been delayed is because of TIME.  Aside from the fact that I never had a “full load” academic term, my laziness gets in the way of it all!  Hahaha!  But seriously, when I had my first full-time job, I just suddenly found myself enrolling in ONE ACADEMIC TERM per year.  Hence the delay.  And hey, it wasn’t easy to juggle work and (graduate) school!  Period.

And since I’m also unemployed as of press time (haha!), I’ve no choice but push through with my comprehensive exam.  I still have to pass certain documents to be permitted to take the exam NEXT WEEK (!), but yeah… 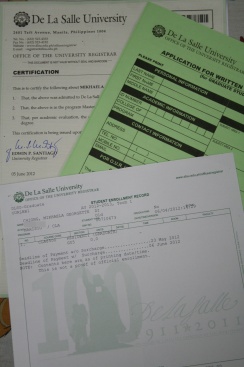 some of the (essential) documents in graduate school! harharhar.

As for my thesis, I’ve always thought of it as “a bridge I’ll cross when I get there.” The problem is, I’m already thisclose to THAT bridge and I still don’t have any idea what to do with it!!! 😦

Okay, one of my professors suggested that I do something about diplomatic history…  which I readily obliged last year (my “ONE ACADEMIC TERM per year” in 2011:

That was the paper I did in one of my subjects — Historical Methodologies — which was supposed to “prepare” me for thesis writing.  Unfortunately, my fickleness is kicking in again and now I’m not sure if I still want to go with South Korea…  Waaahh!

But like I said, I’m currently unemployed.  And that really doesn’t give me any choice…  So my battle plan is to use TIME itself again.  If “time” is what delayed me, I think that it’ll also be the one to help me.  How?  By doing it ONE STEP AT A TIME.  So this term, I have to deal with my comprehensive exam first! 🙂

Having said that, maybe I’m not a lost student after all…

Maybe I’m more like a wander student!  Wahahahaha! And as J.R.R. Tolkien put it,

“Not all those who wander are lost.”

And right now, holding on to those words is good enough for me.  So help me God! 😉

2 thoughts on “The Lost (Graduate) Student”