TRAVEL. It’s both a noun and a verb, depending on how you use it. But one thing’s for sure, people love it. Thanks to the birth of those promo fares and whatnot, traveling is more common now than before. Be it domestic or international, as long as you take the time to explore a place, that’s traveling! I, myself, am one of those people who love to travel, whether it’s a few minutes away from home or several thousand miles away from my country of origin! 🙂 I first traveled to Hong Kong with my family when I was five years old but of course back then, I couldn’t care less! Hahaha! A few more family trips, both local and abroad, happened after that but it was only in 2006 when I was truly bitten by the travel bug. Yaazzz, for almost a decade now, I’ve been traveling AT LEAST once a year. I make sure I ride a plane or experience something new AT LEAST once a year. 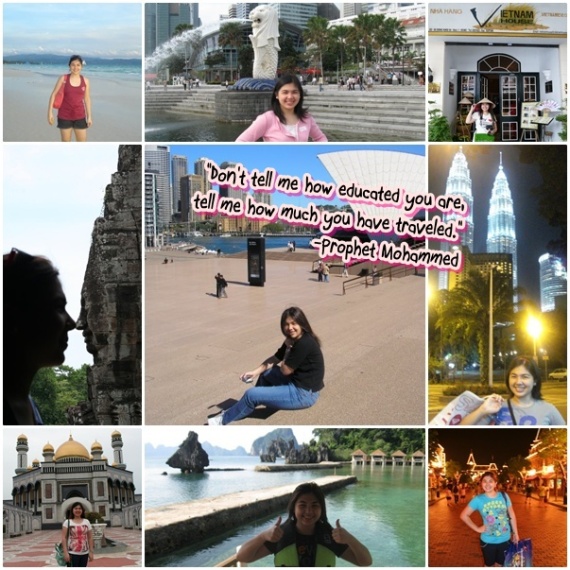 To give you (and myself) a recap:

2006 – I spent one week (my short term break, no thanks to my school’s trimestral system! haha!) in Sydney, Australia with my sisters. This was also the trip when I finally conquered my fear of flying, thanks to our eight-hour direct flights to and fro. Before this, I was always “emotional” before every flight! Haha! Mabuhay!!!

2007 – It was my first time to travel with only my college friends, and we spent nine whole days in Hong Kong to attend the International Model United Nations, at the same time visit Disneyland for the first time!

2008 – After my college graduation, I traveled to Davao, Boracay, and Kuala Lumpur, Malaysia — all for the first time!!!

2009 – My sisters and I went on an Asian cruise, where we had stops in Singapore and Phuket, Thailand. We also went back to Boracay this year, after my sister’s wedding.

2010 – I fell in love with El Nido, Palawan and its then three resorts (they’re now four) — Miniloc, Lagen, and Apulit. (The fourth is Pangulasian, which is on my travel bucket list! #ElNidoResorts)

2011 – Back to Singapore, El Nido, and Hong Kong respectively. But this time, my then one-year-old niece tagged along! Yay!

2013 – Back to Boracay and re-“discovered its shores” (*hint, hint*), as well as went back to Hong Kong. Yes, the next time I go to HK, that will be my 6th or 7th time! I hope there’s something new in Disneyland every time…

2014 – Cebu with my family (finally with my two nieces!) during the summer, then Bangkok, Thailand for one weekend in November!!!

2016 – I’m already booked for Bacolod and the three “lands” — England, Scotland, and Ireland. My boyfriend and I are also planning some hiking trips together. But I’m hoping I can also squeeze in some solo travel (or not) by the beach. Guam, perhaps? Thanks to Cebu Pacific’s promo fares, I can easily say taraaa! (Probably my second “travel year.” So I guess it happens every leap year? Hahaha! But this time, I have to juggle it with my full-time work. Thank God for annual leaves!!!)

So again, YAAZZZ. I love traveling. I may not be a “hardcore” traveler (at least not yet), but I have enough love for it. But you know another thing I love? WRITING! ❤

Combine traveling and writing together, and you get…

Well, in 2012, I actually started a blog project that focuses on featuring travelers here on the blog. It’s still on-going, although I’ve limited it to one feature per year. Yikes! I already have my next featured traveler, but I’m hoping to get mooore! So if you want to be featured, just send me a message! In the meantime, you can check out my FEATURED TRAVELERS by clicking HERE.

AND if you’ve got more travel stories to share, you can do so through FOOTSTEPS MAGAZINE!!!

Footsteps mag is the brainchild of my friend and former colleague, Kevin Tuazon. The one on the cover of the maiden issue is Ann Luna, another friend and former colleague of mine (but from a different company! #smallworld indeed!). Kevin considers this a personal passion project and while reading it, I was so proud to know a friend like him. It’s actually at par with all the travel magazines out there, and yet this one is for FREE!!! Well, at least for now. Like I said, it’s such a great read that I have high hopes for Footsteps. Like it’s tagline, I can truly see it “going places” and “telling stories” in the long run, one issue at a time!

According to Kevin, the maiden issue’s theme is discovering the passion for travel — whether in the Philippines or other countries. If that piques your curiosity and/or interest, I say go to this link — https://issuu.com/footstepsmag/docs/footsteps-jan2016/1?e=0 — and “travel” in the comforts of your own home or wherever you are right now. You can also download the Issuu app (on Android or iOS) for offline reading, just in case. 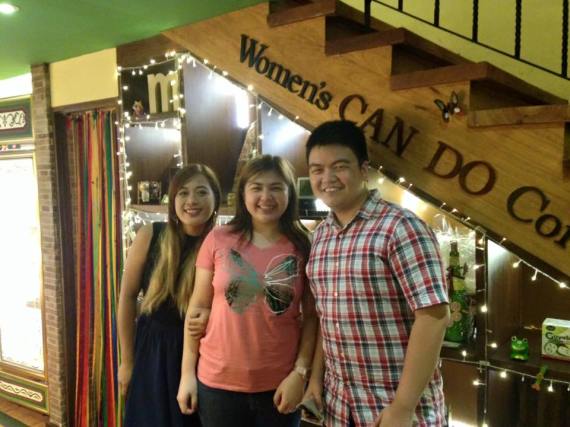 with Ann and Kevin 🙂

We hope you enjoy reading, and happy traveling!

4 thoughts on “Travel One “Footstep” at a Time”