I started my (travel) blog project all the way back in 2012, wherein I feature different travelers who have been to unique destinations OR have unique experiences in familiar places. Even though there were “hiatus” years in between (check it out here! haha), this blog project has been an on-going one — and will be so in the years to come! 😉

Sooo, to kick-start this again and inspire you to reach for your travel goals this coming 2018, I’m sharing with you a wanderer — her name’s Mzarriz, but we’ll call her Em for short in the entire post — who has recently been to one of my dream destinations: ICELAND!

But first, just a quick background. How did all this traveling start for Em? She shared, “In 2005, I was a flight attendant without previous experience of traveling internationally. When I finally earned my free tickets as part of my company benefits, I immediately used it and traveled to Bangkok, Thailand — my first international travel, and I was with my fellow flight attendants. We were so excited, quite unassuming and super tipid! Our last meal there was even nilagang mais that we bought in the streets because we no longer had money. I overly enjoyed the sightseeing, shopping, and bonding with my friends. We tried the food, got lost a number of times, watched a live adult show in Phat Pong, and roamed around numerous temples and thrift markets. It was definitely fun!” Em sure did have a lot of fun during that trip and since then, she told herself that she’ll continue to explore and see the world. She said, “Traveling, for me, is really addictive and exhilarating. The feeling of stepping onto an unknown place for the first time with a promise of discovery and appreciation has inspired me to go to a place I’ve never traveled to before at least once a year.”

All of Em‘s travels are a combination of both work and play. For Iceland, though, it was definitely all “play” because it was a personal trip. She mentioned, “My friends and I went to Iceland last October 2017 as part of our annual vacation leave. We flew to Reykjavik [Iceland] from Los Angeles (LA) [USA]. The fare was much cheaper than the ones coming from the Middle East or Europe, that’s why we decided to go via LA. We had free tickets from Manila to LA, anyway. Then we went around Iceland via a rented car. After exploring Reykjavik, we went to Vik, then Hofn, and back to Reykjavik again. We spent two days and nights in Reykjavik, and one day and night each for Vik and Hofn. We stayed in rented houses we found via Airbnb. Fortunately, Iceland is one of the safest countries to visit, and all of our hosts were very accommodating and gracious.”
❤
So what were the places Em and her friends explored in the “Land of Fire and Ice” that you can visit, too?
—
While in Reykjavik, go to:
Thingvellir National Park 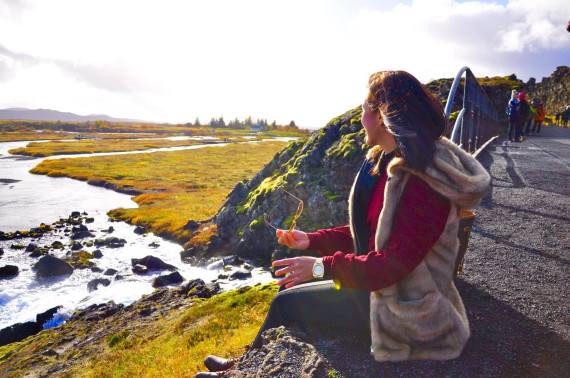 Em in the Blue Lagoon

Travel tip on the Blue Lagoon: “Book early — as in weeks early! Based from our experience, we booked three days before and, the only slot available to us was at 8PM. Kaya ayan, madilim na tuloy sa Blue Lagoon, parang nasa pool lang sa Pansol, Laguna. LOL.”
—
While on route from Reykjavik to Vik, stop by:
Seljalandsfoss Waterfall 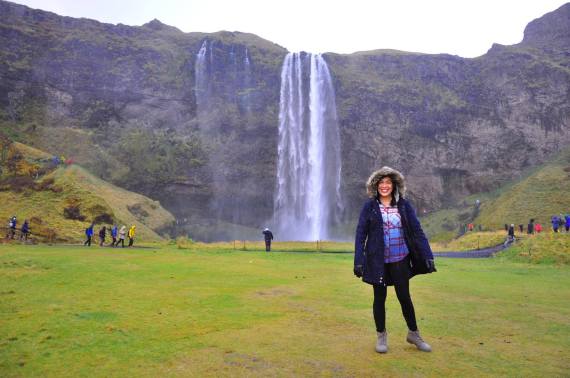 Em in front of the Seljalandsfoss Waterfall

Em basking in the Solheimajokull Glacier

Em and her friend on top of the Solheimasundur Plane Wreck

—
While on route from Vik to Hofn, visit:
Reynisfjara Beach

Halsanefshellir Cave (also in Reynisfjara, where the dragon glass in GOT is mined)

Em in the Jokulsarlon Glacier Lagoon 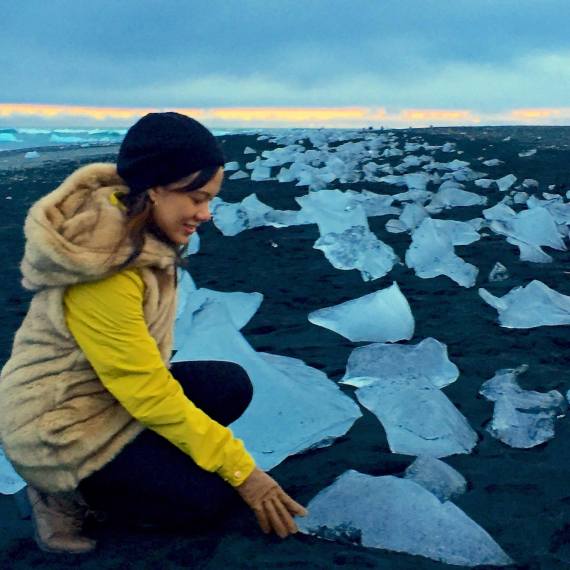 Diamond Beach is just on the opposite side of the Glaciers

—
While on route from Hofn (then back to Reykjavik), don’t miss out on:
Kerid Volcano Crater in Selfoss

Em standing on the Kerid Volcano Crater in Selfoss

And after all those breathtaking photos, wonder where’s the most sought-after Northern Lights? Well, Em saw the Aurora Borealis (or the Aurora for short) in Hofn, too! She explained, “The experience that left us the biggest impact when we traveled to Iceland was seeing the Northern Lights. I admit, it’s in my bucket list. A colleague of mine went to Iceland before and never had a glimpse of the Aurora. Another friend of mine who has been to Iceland three times saw the Aurora every time she went there. So seeing it is a combination of luck, timing, and persistence. We were actually nervous that we won’t be able to see it because it was cloudy most of the time in Iceland during our stay. Luckily, on our fourth night, we actually saw it when we drove just 10 minutes from the house that we were staying in at Hofn. And we saw it three times in a span of three hours.

a glimpse of the Northern Lights (a.k.a Aurora Borealis) in Hofn, Iceland

“The Aurora was simply breathtaking. It’s actually magic happening in front of my eyes. At first it was just a mere glimpse of moving laser lights hiding beneath the clouds. And then it mightily showed itself covering widely enough the sky above us, swirling, dancing, and sparkling for more or less than 20 seconds.

more sightings of the Aurora in Hofn, Iceland

“It might be short, but it was good enough for us to admire it endlessly. That experience somehow miraculously connected my soul to the universe and made me realize how small I am in a universe so vast, yet worthy enough to witness one of its manifestations of power. A beauty like that will never be equaled by anything made even by the highest technology of mortals because I felt that it was created not because of pride, but because of love. It’s just once again an evidence of how powerful our omniscient Creator is. But also, more importantly, of how loving He is.”

more sightings of the Aurora in Hofn, Iceland

Whew, right? Em, sure, was lucky enough to experience the Aurora during her first trip to Iceland! But before you even go to Iceland (or any other country for that matter), what are Em‘s travel tips in general? Let’s take a look at ’em (no pun intended! haha):

After all that has been said and done, why will Em continue to travel? She answered, “Traveling opens your eyes, your mind, and your heart to the good and bad, beautiful and ugly, fact and fiction, and oddly, to answers and more questions.

“The places I’ve seen only in the movies and imagined through the books I read when I was young came alive when I saw them in my travels. They made me think that they weren’t just mere inventions of bored minds but actual and real places! And every place has a story! That’s the beauty of it. And as cliche as it may sound, yes, the world and our life are like a book and when we do not travel, we read only a few pages. Traveling is learning. And though we may not know all the answers, I guess it’s enough to know that there are answers. And maybe when I travel again, I might stumble into one.”

Well said, Em! And from one traveler to another, here’s to finding answers to some of life’s trivial questions, all thanks to wandering!! Carpe diem!!! ❤

—
For more of my other featured travelers on this blog, click HERE.

2 thoughts on “Featured Traveler: Em in the “Land of (Fire and) Ice””