Mikhaela Georgette (MIKA) is a devout Catholic (“katolika” in Filipino) wife from MNL, PH striving to be Jesus-like ("striving" being the operative word), as well as spread His love, one blog post at a time!

BERMUDA.  Aside from the infamous “Triangle” that comes after this place’s name, what else do you know about Bermuda?

In fact, rephrase that.  What SHOULD you know about Bermuda? 😉

Well, that’s the goal here — to answer that and more.  Much, much MOOORE!

But first, let’s get to know our “tour guide” in Bermuda and our family friend — September’s featured traveler, Rema! 😀

She has been to the Philippines (of course!), Australia, the U.S., Germany, the Czech Republic, Italy, France, the U.K., China (Hong Kong and Macau), and of course, Bermuda!  So how did all of this traveling started for Rema?  When did she “catch” the so-called travel bug?  “Well, since I was a kid, I’ve always referred to myself as ‘gala,‘ ‘layas,‘ or ‘makati ang paa’ — all of which means that I love to be always on the go and not stay in the house.  I have this ‘up for anything’ attitude and ‘anywhere the road takes me’ kind of view in life.  While still living in the Philippines, I’ve already had my fair share of travels within the country and I went to Australia to visit my family before starting my ‘career journey’ to Bermuda.  One of my deepest desires is to really travel and as they say, the rest is history.”

And in Rema‘s “life history,” Bermuda now occupies several chapters — if not an entire book — in her story.  She shared,  “I’ve been living and working in Bermuda for five years now.  Wow!  Even I can’t believe it everytime I say it.  Time really flies fast when you’re having fun.  Most, if not all of the expats here, will tell you that they’ve come to Bermuda for only two years and found themselves staying longer.  In my opinion though,  Bermuda’s not for everyone.  If you’re a city boy or girl, it may be difficult to adjust to the lifestyle — but luckily, I’m a country girl.  Born and raised in Bulacan, I’m a ‘probinsyana’ through and through — so Bermuda’s so right up my alley.  The ‘Rock,’ as we call it, has about 64,000 people — both expats and locals included.  Pretty small, no?  But people here know how to make use of their time and resources.  From the various summer activities to house parties during the winter, there is something to do in Bermuda after all.

“Being on this side of the world, I can’t help but take advantage of traveling.” 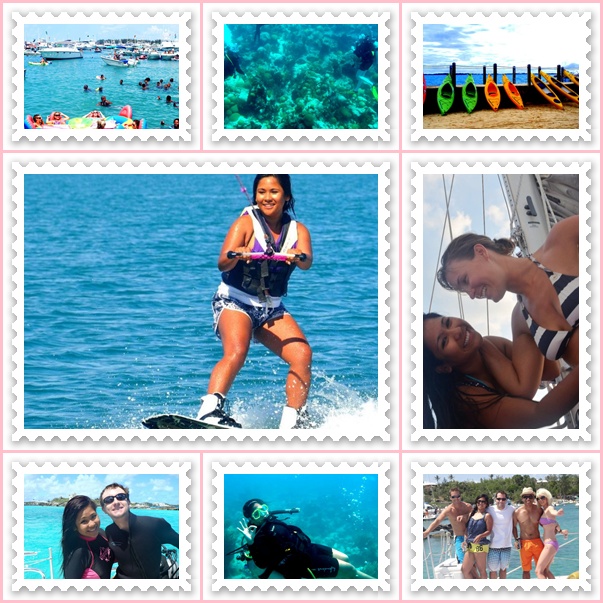 Let’s start with the basics first.  So what should we know about Bermuda?  Rema answered, “Bermuda is a British territory in the North Atlantic Ocean (yes, our money has the Queen’s face on it).  The main businesses of the island are Offshore Finance/Investments and Tourism.  The island has pink sand beaches (thanks to pink algae) and aquamarine waters.  The island looks like a wide horse shoe and we only have East and West sides.  Also, the island doesn’t have cities or suburbs.  What we have are parishes — and there are nine of them.

“We drive on the left side of the road and there are only two lanes, thus the small cars and mopeds.  One household is allowed to have only one car to limit road traffic.  The main kinds of transportation are mopeds/scooters, cars, and buses.  And of course, I drive a moped for that’s what it means to truly experience Bermuda!

“There are also a lot of churches and different religions.  There are six catholic churches in Bermuda so when we do our visita iglesia during Easter, we’re always one church short — doesn’t stop us from pushing through with it, though.  The various churches have a lot of volunteer activities for the poor.  One that I’m actively involved with is the Soup run by The Salvation Army.”

As for food?  Rema declared that “Bermuda’s famous foods are codfish, fish chowder, and potatoes.  The island has mixed cuisine: American, Italian, Chinese, Mexican, Jamaican, and just about anything with just two or three restaurants for each kind.”

Now let’s go to the fun part: the tourist sites!  Rema said, “Since Bermuda is mainly a tourist attraction, everywhere’s a must-see.   By living there for five years, I think I’ve been to almost all of them.”  Having read that, here are some of her recommended tourist destinations:

Beaches
“Some of the famous beaches are Horseshoe beach and Elbow beach.  These are located on the west side of the island, while I live on the east side (since there’s less traffic).  There are beaches here and there, and people have their own favorites.”

Lighthouses
“There are two lighthouses on the island, each on the east and west sides.  I love Gibbs Lighthouse, which is on the west side, as it gives me a more aerial view of Bermuda whenever I climb the top.”

Dockyard and St. George’s
“Dockyard’s on the west side.  From the name itself, it used to be Britain’s largest naval base outside the U.K.  During summer, cruise ships dock there and people take the ferry to go to the town and do some sightseeing.  On the other hand, St. George’s is on the east side.  It used to be the city of Bermuda.  But until now, it still boasts of a lot of tourist destinations such as shops, restaurants, forts, and beaches too.” 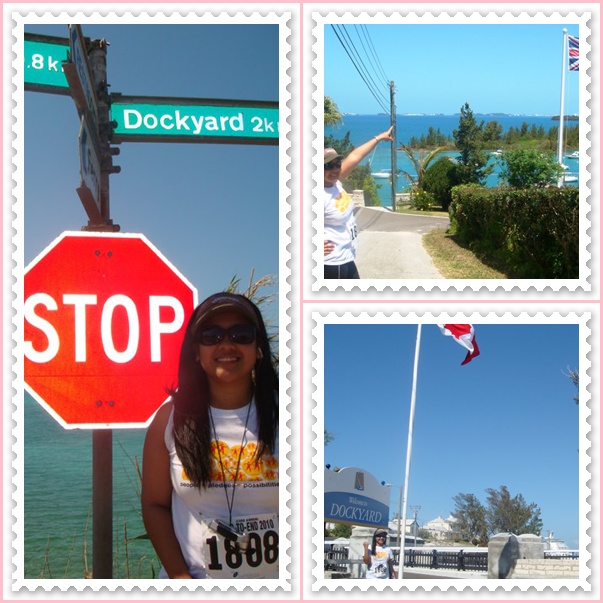 The Swizzle Inn
“This is the island’s famous pub and restaurant, and of course there are only two branches.  You guessed it right — one on each side.  This is a favorite among locals and expats alike — open seven days a week.  And during the summer season, it even offers live bands at night.  The famous drinks in Bermuda are called Rum Swizzle and Dark and Storm.  All very yummy!  Bermuda’s very famous for its rum — gold, black, white — name it, Bermuda’s got it!” 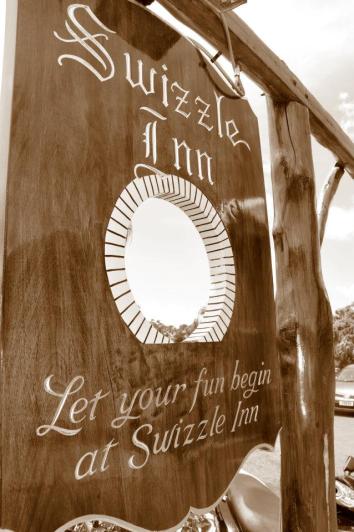 Other “Happy Hour” Destinations
“Bermudians and expats love their happy hours!  During summer time, when the clock strikes five, people will come running to the Fairmont Hamilton Princess (one of Bermuda’s largest hotels) for happy hour.  This lasts until 9PM, then people either get dinner or go straight to Lemon Tree for more ‘happy hour’ until 12 midnight.

“Lemon Tree is a small cafe that is next to a park.  During happy hour, they open a portion of the park for everyone.  When the clock strikes 12, people in Bermuda still continue to party…  Next possible destinations could be Pickled Onion, Cairo, or Cosmopolitan — all are nightclubs with plenty of drinking and dancing.

“Pickled Onion or what we call PO, closes at 2AM, while the other two close at 3AM.  After that, it’s time to go home…  except of course when people still go crazy and have pool parties, or just go to a random beach for a swim.  I’ve to say that it’s a really good cure for hangovers!  When winter comes, we still do happy hour but not as extensive as how we do it during summer time — especially since it can be really quite cold in a subtropical island like Bermuda.” 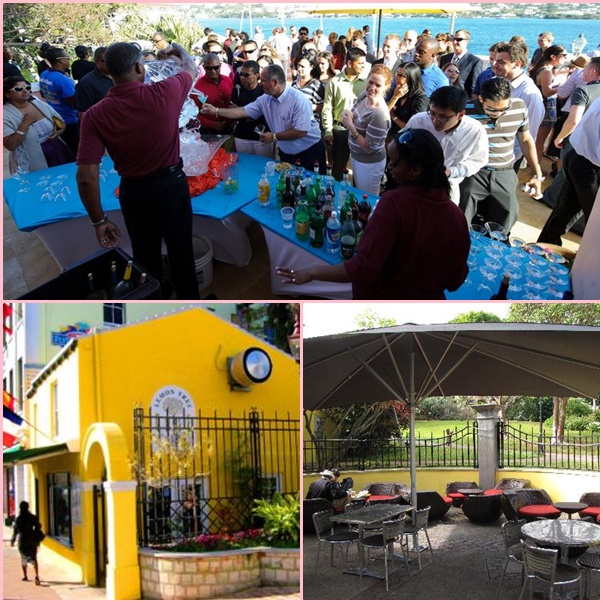 But after traveling around (and living in) Bermuda, where else does Rema plan to go to?  She admitted, “I’ve always wanted to go to Greece!  I honestly don’t know why.  There’s something with the white houses overlooking the water (not that I haven’t seen enough in Bermuda) that interests me.

“And guess what?  Next week, I’ll be traveling again.  A friend of mine is getting married in Ireland and because I want to take advantage of my visa, I will travel to Europe once again.  I won’t just be in Ireland, I’ll also visit Germany (Cologne) and Spain (Ibiza) and yes…  Greece!  I’ll be there for a week to visit Athens, Mykonos, and Santorini!  I can’t wait!”

Well, Rema deserves it!  After all, traveling FOR HER is this: “Traveling and meeting new people open your eyes to the world.  It is indeed big and it is indeed worth experiencing.  For those of us who have traveled, the experience is beyond explanation; the lessons you’ll learn will be a part of your life forever.  You’ll meet people from all walks of life — some you will envy, and some you will pity.  But mostly you’ll just be grateful for where you are, who you are, and who you want to be.

“I became less materialistic.  Some of my friends might argue but I believe that even though I still want a lot of things, they don’t really matter that much anymore.  I realized that there is something more important than material things,  and you’ll just learn how to let go of them.  I’d rather travel than have a brand new pair of shoes or clothes.  Life’s short, so live it well.  There are too many places to see, too many lessons to be learned.”

Speaking of lessons learned, seasoned travelers always have one or two (or more) that they get to impart to other travelers.  As for Rema, here are hers — or what most of us know as TRAVEL TIPS!  “Grab a map and go!  Nothing’s stopping you.  I like planning things, and I’m proud to say that more often than not, I follow them (I also think this holds true for traveling!).  If I plan a trip one or two years from now, I’ll do it.  Some people might change their minds, reevaluate their plans, but me?  I’ll definitely push through with it.  There’s something about being on the other side of the world that makes me push myself to do things I’ve always wanted to do (that I couldn’t do before).  So yeah, I just grab a map and go.

“Follow your dreams and do what you want.  Each of us has only one life to live, so live it with no regrets.“

Thanks, Ate Rema! Looking forward to traveling with you SOON! -Mika xx