Last Thursday, I renewed my driver’s license.***  No big deal, right?  At least NOT UNTIL it was time for my medical examination and I finally stepped on the scale!  When I saw what I SAW, I was like, “WHAT THE F—?!”

You see, the weighing scale and I, we share a very unique relationship.  For the past three years or so, I’ve been weighing myself EVERY NIGHT (seriously!) just to keep track of my weight.  I’m aware that for the last three years, I’ve gained THIRTY FREAKIN’ POUNDS, but on the bright side, I’ve maintained it as well.  This is my HEAVIEST and I’d like to think that THIS SHOULD ALREADY BE MY LIMIT!  That’s why I’m addicted to the scale…  just so I don’t go BEYOND THE LIMIT anymore.  But the LTO (Land Transportation Office) weighing scale really shocked me!  It was like I gained almost 10 pounds overnight!  My weight the night before wasn’t the same the following day!  ANO BANG PINAGKAIBA NG WEIGHING SCALE KO SA BAHAY AT SA WEIGHING SCALE NG LTO?!  Fuuudge!

Oh who am I kidding?  I know the answer to that: LACK OF DISCIPLINE! 😐

I’ve always been on the “chubby side.”  But right after I graduated from college, I finally joined a gym — Fitness First — and it worked!  That was the time I achieved my lightest weight.  2008-2009 was my “fitness year” if I may say: 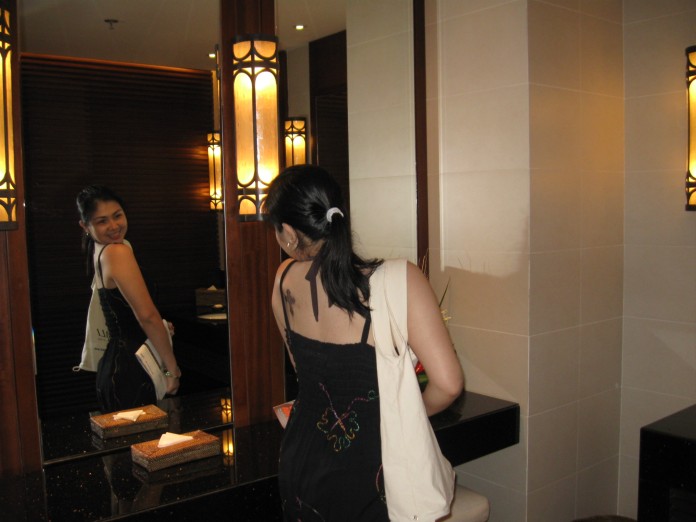 Yeah, I still wasn’t stick-thin (not that I want to be!) but I can say that I was finally happy with my weight.  I could already fit ALL of my clothes and my self-esteem improved! 😉  But when I hit the one-year mark, I cancelled my gym membership.  I don’t know…  maybe because I thought it was already enough — and that’s when I got it all wrong!  Exercising can never be enough.  Period.  Just think of Fitness First’s motto:

“MOTIVATION is what gets you started, HABIT is what keeps you going.”

Sooo true!  Once you finally get used to exercising, it’ll be a no-brainer anymore.  But be CAREFUL!  Because once you STOP, well, you won’t be able to stop NOT exercising!  And that’s exactly what happened to me. 😦

Starting from late 2009, I’ve been living a very sedentary life.  I actually decided to join another gym — Gold’s Gym — last year, but that didn’t do any good either.  I did, however, see a lot of “eye candy” there (including Fabio Ide!  Haha!), but I still couldn’t bring myself to find my so-called “motivation” and “habit.”  So after I hit the one-year mark again, I cancelled my membership too.

Right after that, I went back to Fitness First — PRESENT TIME!  It has already been TWO MONTHS since I went back to my “gym love,” but so far…  well, I’m still STRUGGLING to bring back my “motivation” and “habit.”

That’s right: it’s ONE. BIG. STRUGGLE!  Para lang akong nagsasayang ng pera! 😦  But nooo, I can’t do that anymore because this time, THIS TIME, I’ve an 18-month commitment and I just hope…  I just really, really hope…  that even before I reach the 18th month, I’ll already achieve what I’ve achieved before!  Tamaaa!  If I was able to do it before, then that must mean that I CAN do it once more!!!  There are already some “action plans” brewing inside my head, so let’s just all hope for the best!  Operation Kalusugan: oh it’s sooo ON!

So there.  I’ve shared with you my so-called “struggle” — my STRUGGLE WITH MY WEIGHT!  I know, I know.  It’s so petty compared to others’ struggles, but please give me some slack!  Next week will be my 22nd birthday, and I just hope that I’ve learned enough lessons in my past 21 years — especially with this particular “struggle.”  I’m hoping that starting on my 22nd year, I can finally GET BACK ON TRACK and stay there for as long as I can! 😀

But before I end this, I just want to say something to all those who’ve been “commenting” on my weight gain…

I know some “comment” on it because they’re concerned for my HEALTH…  and for that, I wanna say THANK YOU.  I’m really, really trying my best to ALWAYS put that in mind.  After all, HEALTH IS WEALTH! 🙂  But for those who “comment” on it for the heck of saying something OR to feel good about themselves, well…  I’d like to say “SCREW YOU!” but I guess I’ll try to be the bigger person (both FIGURATIVELY and LITERALLY!  Hahaha!)  Ah basta, isa lang ang masasabi ko: pare-pareho lang tayong TAO — kaya hindi malayo ang posibilidad na TUMABA RIN KAYO!!!  Wahahahaha!  PEACE!

In the mean time…

…at least I’ve something to smile about! 🙂  My current weight may be common to an average MAN’S WEIGHT, but at least I weigh like one. very. fine. man: Fabio (see my previous post).  No, I’m not saying that I weigh EXACTLY like him (feeling ko kasi i-gooGoogle niyo eh!  Hahaha!),  but you get what I’m saying!  I can finally say that Fabio and I have SOMETHING IN COMMON: our weight!  Wahahahaha!

“Fabio:  The eyes.  That’s what I first look at in a girl.  I don’t like really tall girls; I like funny girls, very athletic who know how to enjoy life.  I like girls with a big butt.”

Emphasis on the last sentence, please: “I LIKE GIRLS WITH A BIG BUTT.”

P.S: For all the girls/ladies/women who have the same “struggle,” I suggest you read The Plump Pinay.  I just recently discovered this blog and I’ve to give it to Danah and Stacy Gutierrez (the authors) — they’ve been inspiring me from the moment I first set eyes on their page! ♥

***I renewed my license at Ayala MRT Station.  And in fairness, it took me only one hour or less to do the entire process!  Kaya kudos to LTO!  Uyyy, improving!  Keep it up!!!

2 thoughts on “The Struggle”